In a career that spans over four decades of musical innovation and achievement, Bruce Lowe is a constant reminder throughout the music industry of how powerful the combination of extraordinary talent and creative magic really is. Always on the cutting edge in music technology, his fresh approach to sound design and music production has made a major impact on today’s new generation of sound.

A master of the key elements in music and production, Lowe’s expertise draws some of the biggest names in pop to his door. Stevie Wonder, Elton John, Michael Jackson, Madonna, Paul McCartney and Quincy Jones to name but a few artists he has shared inspiration with. His credits include accomplishments as a record, film, television and commercial producer, composer, arranger, performer, sound designer, and engineer and he is a widely recognized expert in the art of synthesizer and computer programming. Bruce is also a multi-instrumentalist & vocalist as well as a solo recording artist.

His numerous credits showcase the constant demand for his talent. He has produced Andrae Crouch, Michael McDonald, Billy Preston, Dyan Cannon and many more. He has designed three Grammy winning records with Andrae Crouch. His film credits are extensive, including a monumental accomplishment in “The Secret Life Of Plants”, noted by the film industry for the exciting synthesizer and computer sounds he created for Stevie Wonder. He also worked extensively on the 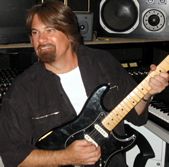 His recording studio provides a diverse inventory of musical instruments ranging from “oldies-but-goodies” to the most modern “state of the art” digital recording equipment, and his extensive sound library includes orchestral instruments, drums/ percussion, guitars, effects, old and new sounds, weird original sounds, ethnic sounds, very unique sounds from around the world and thousands of sounds in many other categories.